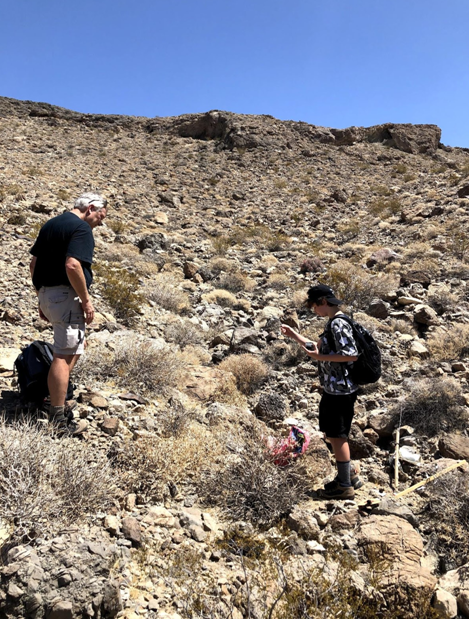 It’s not too often that we off-roaders get to take our vehicles out on a mission to help others retrieve items lost in the desert. Operation Weather Balloon was one such instance that getting out in the desert meant more than a good time with good friends; we were on a mission to find a weather balloon that had ended up in the flaming hot Mojave desert just outside of Baker, with only gps coordinates and a can do attitude!

The mission started with a post on facebook from the assistant principal, Micheal Horton, at Western Center Academy.  His daughter is part of a program called “Back to Space”, that has mission of getting people excited about space exploration, especially young people.  The program is made up of “ambassadors” (the kids that are part of the program) from all over the country.  On Saturday, August 10th the kids in the program launched a weather balloon from Temecula, it was equipped with cameras, data recording equipment, a gps tracker, a nice frame to hold it all together and a parachute to help provide a soft landing. It was expected to reach approximaetely 90,000 feet before the balloon would pop and everything would come down to earth.  On Sunday morning after the launch the kids excitedly watched the gps as the balloon kept moving east.  They loaded up in cars, and started heading in the direction of the balloon; the Mojave Desert in August.  They ended up in Baker around 4:00 in the afternoon, and drove east on Kelbaker rd for roughly 18 miles. They pulled off the road a little past where the Mojave road crosses Kelbaker road, and being in cars they didn’t get very far off the pavement before all the kids got out and started hiking toward the gps coordinates that were being sent by the tracker. The kids hiked for hours in the hot desert terrain, up and down hills, through washes, over boulders.  The group gave up at 10:00 at night, and the one 4WD vehicle that the group brought took a dirt road out to retrieve the tired and defeated kids. Micheal Horton then posted the account of the failed attempt on facebook, after showing my ever supportive husband Matt the dilemma that the group was in we decided that the club could go get the balloon.

Matt and I looked at the area the balloon was in from every angle on Google Earth, it looked like we could get within half a mile before anybody would have to hike, and even then the hike looked like a pretty easy wash to then climbing up a hill to reach the actual location of the balloon.  I sent out a facebook post and an email to gather members for the adventure. At 4:00 am on August 23rd we were joined Josh and Christina Epstein and kids; Mike Hardy and Lisa Saenz; and Steve and Kim Fusilier. We all headed towards Baker to complete our mission.  Along the way we were joined by three people that were part of the launch of the balloon, Rick Maschek, who worked in the Mojave Desert for more than 30 years doing search and rescue, he was full of stories about all the bodies he had recovered in the desert. We were also joined by Michael and Lance Gorton from Texas, Michael is the president of the “Back to Space” program and his son Lance is one of the student ambassadors.  They rented a jeep that surprisingly was able to make it out in the open desert for quite a way before we decided it was best to park it before we got any farther off the trail.

Most of the drive out was uneventful, we took Kelbaker rd. east for about a mile and got off at Brannigan Mine rd., we followed that until we hit Kelso rd. and headed south.  We were fortunate that the wash we needed to take also had a road for part of the way, and then we made our own road up to the spot that we thought we’d be able to hike in at.  Josh had decided he wanted all the glory and had gone ahead of the rest of the group and was already hiking when the rest of us discovered that the spot we thought we’d hike in a was a 40 to 50 foot waterfall, and there was really no way up it. Josh had taken the wash before the waterfall to start his hike, he was followed by the guests that had joined us in the search.  Matt decided to try and go in past the waterfall and was able to find a route that would lead him to the correct canyon that would eventually end in finding the balloon.  The rest of us stayed with the jeeps, all the hikers had radios to communicate back with us how they were doing and with each other.  What we thought would be half a mile in turned out to be one and a half miles back, and it was hot!!!!! Lance had brought a drone and kept combing the mountain side for any evidence of the parachute. After roughly 2 hours of hiking the balloon was recovered, the parachute had never opened so parts were scattered all over the hillside. Once it had come over the radio that the balloon had been found and Josh realized he was not going to take all the glory, he headed back towards the jeep, he chose to come down by the waterfall that was un-climbable, it was a bit unnerving watching him come down, it would have been painful for him had he slipped. It took about 2 more hours for the other hikers to get back to the jeeps. They were exhausted, done, over it.  We all loaded back up and headed back to Baker.  Thank you Josh, Christy, Steve, Kim, Mike, Lisa, and Matt for doing this, it has meant a lot to the kids that you helped by getting this equipment back for them.