Thanksgiving/New Years At The Bluffs 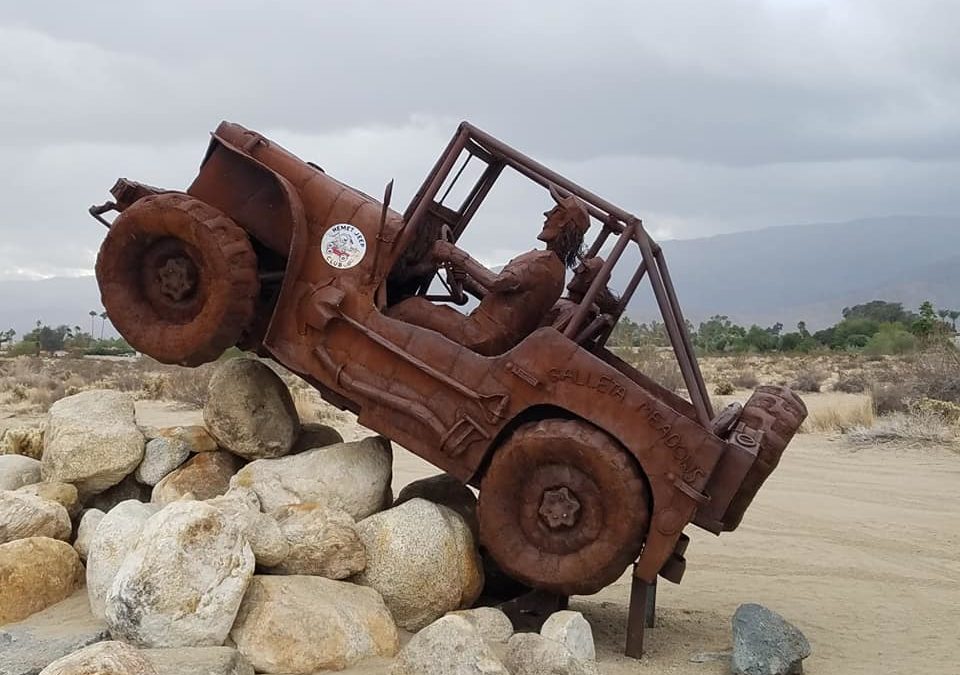 We arrived the day after Christmas along with Bob and LeiLani only to find our usual spot taken by some non-Jeepers. No one was over on the other Bluffs where the IE4W club usually is and we thought that if they did show up we could most definitely share. Other than a few other campers we had the area to ourselves. The air was cool and partly cloudy. Over the next few days we had several members and guests arrive. Each day we had about 13 Jeep’s and went to different areas including the Calcite Mine, Smurfville, Broken Spade Trail, and Boreggo Springs to see the metal art. Along the way we where able to find many

challenging spots that the CJ’s had no problem with but the new, fancy, JK’s with all the special buttons seemed to slow us down. I kept hearing things like, they are longer, needed more lift, the CJ weighs like 500 lbs. compared to them, etc. Trash talk back and forth, it’s all good. That being said, we went to an area that in the past was a little waterfall about 3’ high. Last year it was filled with sand and barely a bump in the trail. This year the rain washed it out and now it’s about 4’ high and a deep rut to one side.  This is where long wheelbase is good. I tried it with my short CJ but the front end came up and relocated to one side. Bypass it is. Several JK’s and JL’s made it and some bypassed. Josh decided to try an extra credit line over the right side and along with some words of encouragement made it on the first try. Roy Davidson named this area the Lube Pit because you can get under your Jeep and check it out. See attached pictures. On our way back to camp one day Al with his Hot and Ready Jeep somehow rolls on his driver’s side, in the canyon right below camp. Words like, “the sun was in my eyes”, “dust in the air”, etc. were used. Other than a broken drivers side window and dented ego, he is ok. He already has his plaque upside down from a previous roll, does he just rotate it 180° or 360°? He does have a new nickname, “Pizza Roll” or “Rollover-Rollover”.  Josh Epstein managed to break off a lower control arm bracket from his front axle. Luckily I had a Ready Welder back at the motorhome. So a quick round trip to camp and back. Josh had it welded up and continued to wheel the rest of the time with no problems.  It was Mark Rodel’s 50 th birthday on Friday and we had a potluck dinner to celebrate.  New Years eve it did rain a bit but not enough to keep us from

enjoying the desert. It stopped trying to rain early evening and we enjoyed another potluck dinner and another great campfire with fireworks throughout the night.  Each night we had a large campfire even though it was windy. The fire felt good in the cold night air as we shared stories. -Roy Wallace