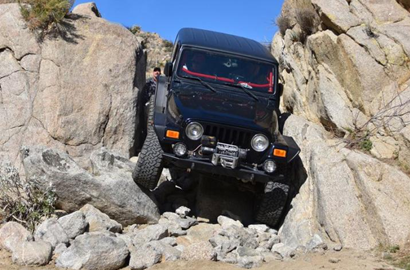 Mike and I pulled into Blair Valley primitive campground on Thursday afternoon. Mike Hardy and Lisa Sines were already there and greeted our arrival. We camped in the club’s usual spot, which is a little alcove surrounded by rocky hills just inside the campground entrance. The evening was quickly upon us and so was the chillier temperatures. No matter how cold it gets, I never get tired of watching the stars and listening to the sounds of silence out here. Mike has been leading this run for over 30 years; he missed last year’s trip due to a short stay in the hospital for low blood pressure. It was wonderful being out of the house and talking to other human beings…no offense intended, Mike! Haha.

On Friday, Mike and I took advantage of the free day and headed to Julian for, none other than, apple pie! The town was busy with tourists and Pacific Crest Trail hikers. After grabbing a sandwich and some pie to take back to the motorhome, we stopped for gas and only paid $4.39 a gallon!
Friday afternoon saw the arrival of more Club members and soon the motorhomes, trailers, and tents were leveled and staked, and everyone was ready for comradery around the campfire. Earlier in the day, Mike had stacked the kindling and logs into our old washtub fire container; it was a Boy-Scout worthy build. Of course, since I struck the match and set it ablaze, I took credit for the toasty fire. It was a lovely evening with clear skies, good company, a roaring incense-cedar-scented fire, and lots of bats to keep the bugs away. Of course, it might also have been the numerous shots of peanut butter whiskey that those-who-shall-remain-nameless had consumed that really kept us thoroughly entertained! I am still waiting for my promised morning coffee “shot” of salted caramel and a taste of the peanut butter whiskey. I guess I will have to wait for another campfire. Teehee.

Saturday morning was crisp and clear. We had at least nine rigs camping with us and we set out to meet the day-trippers at Pinyon Mountain Road. We picked up eleven additional rigs which brought our total to 20. Mike convened the drivers’ meeting, gave an overview of the trip, reminded all to watch out for the rig behind you, and keep the trails clean. We welcomed guests Nic Ledbetter, Jon Monteith, Keith Chann, and Tom Hazen. By 9:15 am we were rolling toward The Squeeze. At approximately 3900’, this area is ripe with pinyon pines (Pinus monophyla). According to Lowell and Diana Lindsay, authors of Anza-Borrego Desert Region: Your complete guide to the State park and adjacent areas of the Western Colorado Desert, “Kumeyaay Indians gathered pinyon nuts from such trees in late summer.” Good safety tip should one get stranded in the pinyon forest without cell service!
It was at The Squeeze we encountered our first traffic jam. There were four Jeeps trying to get through The Squeeze. The first few were successful, but the last Jeep was not having fun yet! The driver kept moving forward, backing up, moving forward, backing up…you get the picture. I looked around our group and figured we had hundreds of years of experience with us just waiting to be asked for assistance. Mike was called upon to help but was frustrated by the driver who was not listening. Oh well. That person finally got through and the rest of the Club proceeded to show them how it was done when you let experience guide you. Everyone made it through The Squeeze, although some (Nic Ledbetter) sustained a little side panel damage more than others. Sorry, son!

Next came the Dropoff, also known as Heart Attack Hill. It was true to its name! Over the years, the hole at the top of the hill had grown deeper and almost all of us had a fun time trying to keep all four wheels on the ground. Mike and I went down first and, as always, I had a smile on my face as my heart was beating 50 MPH! After teetering on two wheels for a couple of seconds, and almost giving Kayleigh Cooke–who was taking a video at the bottom of the hill– a heart attack, we made it down and then proceeded to watch the others demonstrate their nerves of steel and/or Posi traction! Thankfully, it was then time for lunch! The weather was still cooperating with temps hovering around 75 degrees and partly cloudy.
After lunch and clean-up, we hit the trail again headed towards Harper’s Dam and Cabin. Guests Nic and Jon scouted ahead to find Harper’s Dam and Cabin using GPS coordinates. This cabin was built by the Harper brothers in the late 1920s. Apparently, after tapping into an underground spring, the two dams that the brothers built quickly filled with sand, and then their cattle also died of anthrax. That will spoil your lifelong dream of cattle ranch ownership. We chose the up-and-over-the-hill rocky hike to the site and most of us made it to the dam and cabin. Young John Cooke even hung out with Mike and Nic Ledbetter who showed him a little waterfall! Our dog and I both were “attacked” by cholla which is known for tenaciously attaching to skin, fur, and clothing. We recovered and returned to the Jeep. Cholla gardens are beautiful but only from a safe distance! There is another entrance along the wash, but it is an over 2.5 mile trek. Not for these old bionic parts!

We carried on and made a quick stop at the infamous Split Rock for some pictures and then it was on to find the well-hidden Indian blind and morteros (grinding rocks) from long ago. It was here that Jeff Schenk tried to “water” a rattle snake! With his usual cool head, Jeff just backed away and let sleeping snakes lie. We traveled through Hapaha Flat and looked forward to following Fish Creek to our next destination: Diablo Drop Off! It was here that our four-wheeling skills and patience were tested. It was also here that traffic ground to a halt. There were rigs all over the place; some going up and many coming down. It was fun to try to pass vehicles in this narrow wash AND we did it! We watched a group of Land Rovers maneuver past us; one even was a British right-hand drive! While waiting our turn to go up, we witnessed wannabe “influencers” who decided to park in the middle of the trail to take videos of their friends coming down. Now Mike is usually a very patient person, but this was a little too much. He decided to drive up the drop-off while these young men were filming. Oops, did we get a little dust on your lens?! Up the drop-off we all went where we were greeted by blooming Ocotillo. The view from the top is breathtaking!

Now by this time, all the little kiddos—and some of us big kiddos—were tired of riding and were ready to get out of the vehicles and run amuck! Last stop: Big Mud Cave, also known as Cave Canyon, and Plunge Pool Cave. The Big Mud Cave is not really a cave, it is a canyon with mudstone bridges and arches…great for exploring! Just to the right of that entrance is my favorite spot: Plunge Pool Cave. Many got out the flashlights and away they went. Travel into the cave for about 40 feet and you will find yourself in a 50-foot-high dry waterfall complete with a skylight! My dog, Mia and I skipped the exploring this trip and found a nice shady spot to set up a chair and enjoy the afternoon breeze. It is amazing how far voices carry, so we eavesdropped on a conversation about some internal medical procedures that did not at all sound pleasant. I was happy to hear everything came out OK, but Mia was could care less.
All good things must come to an end and so did our Split Rock trip. I am always thankful that Mike knows his way around this area because we followed arroyo after arroyo until we popped out at route S2. Time to air up, hit the highway and return to camp. My only regret on this trip was not making it to the Stagecoach RV park before closing hours to purchase our traditional ice cream sandwich! Boo hoo. Some of our group headed home and others returned to camp to enjoy a campfire and the telling of lies, er ah, tales about heroism and bravery on the trail! 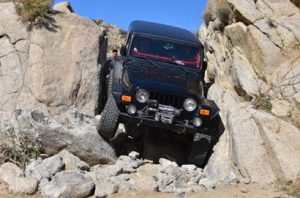 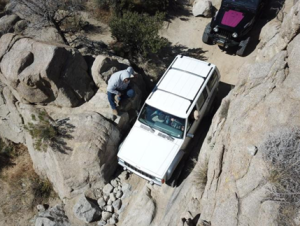 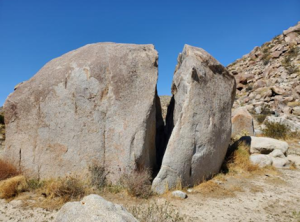 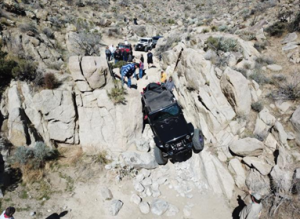 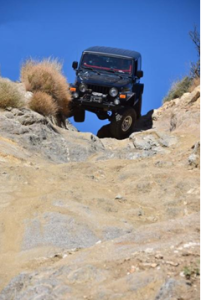 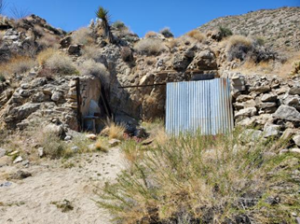 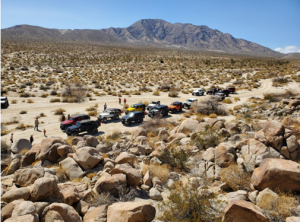 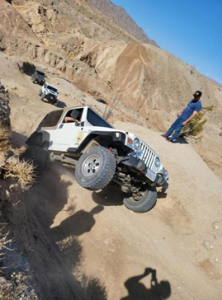