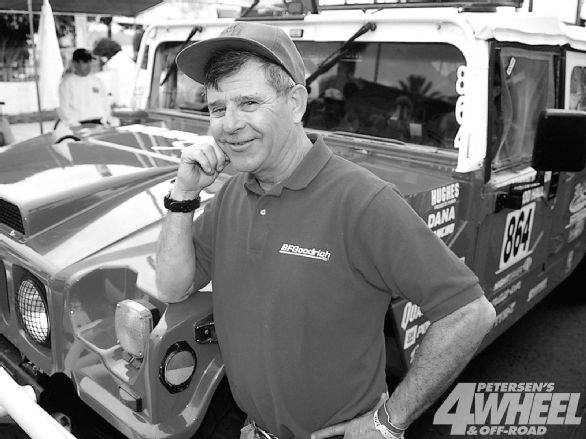 Rod was born in South Gate, California on November 22, 1937. He graduated from Perris High School in Perris, California in 1956. Rod married Donna Lee Bennett on December 6, 1959 in Hemet, California; they were married 59 years. Rod began his off-road racing career in 1964 as a privateer in his personal Jeep CJ-5. By 1969 he was hired on as a full-time driver with the Bill Stroppe team to drive a 4-wheeldrive Ford Bronco. In 1969, Rodand Larry Minor won the famous Baja 1000 Over all in a Ford Bronco, launching Rod’s career into what would end up a legendary one.  In a sport where a dozen major wins can define a successful racing career, no one even comes close to Rod Hall.  Ten-time winner of the internationally recognized Mint 400, ten-time winner of the Parker 400, 12-time winner of the Fireworks 250, 12-time winner of the Baja 500 and the only 17-time winner of the Baja 1000. Over the course of his racing career, Hall has won 14 major class points championships in production 4-Wheel Drive vehicles and well over 150 major events. While many of these records may never be equaled, it is also unlikely that anyone will break his record for 37 consecutive race victories anytime soon. Rod Hall was a unique blend of competitor and entrepreneur in several successful automotive related businesses. He was a loyal team member and partner for some of the finest brands in the auto industry including BFGoodrich, Dodge, Ford Motor Company and the Hummer badge. Rod acquired, nurtured and brought back to life the Off-Road Motorsports Hall of Fame, enabling this organization to grow and flourish for future generations of off-road enthusiasts. In 2017, just shy of his 80th birthday, Rod capped a remarkable career by competing in his 50th Baja 1000.

Rod is survived by his wife Donna Lee Hall, sons Josh Randall Hall and Chad Michael Hall, granddaughters Ashley Rene (Hall) MacLearn and Shelby Lauren Hall, grandson Aleksander Myles Hall, his brother Milton Lane Hall, his sister Alma Duane (Hall) Little, great-granddaughter Ada Elizabeth MacLearn, and nieces and nephews. Rod was preceded in death by son Kevin Allen Hall and parents Raleigh Conley Hall and Mamie Alma (McGuire) Hall. A Celebration of Life open to all will be announced as soon as details can be confirmed. In lieu of flowers, memorial donations may be given to the Off-Road Motorsports Hall of Fame by contacting the Executive Administrator at barbara@ormhof.org. Published in Press-Enterprise on July 14, 2019 https://www.legacy.com/obituaries/pe/obituary.aspx?n=rodney-hall&pid=193392807