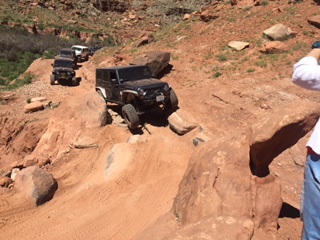 Moab 2019 was great! Perfect weather, a good turnout and a fun mix of runs. I don’t keep track of who’s coming until they show up Monday, then we decide of what run to do based on the group’s desires. We decided to start with Kane Creek Canyon, an old favorite that WAS rated a 6 (out of 10), but now has a 7 rating. We began to see why when we came across an abandoned Jeep in the middle of the trail, then looked at the “climb-out”….pretty scary. Wonder why they just this year installed a winch point? We all made it, one way or the other but Brian Fusilier had the most memorable experience when he ripped  a fender off the almost new JL.

I’m thinking of renaming our week of adventure “The HJC Moab E.R. Run”. Our fearless leader showed up Monday afternoon with the entire family on lockdown in the motorhome with the flu. Seems they fraternized with some other sick HJC members at Calico and all caught the bug. We were actually worried when all we observed was a closed up motorhome with no sounds. CO2 poisoning? Charles Manson? Laura caught the Bronchitis thing the week before and had to go to both the Urgent Care and E.R. But Mark Roedel took top billing by having a stroke in camp during Happy Hour and getting a ride to the E.R. with the ambulance. Luckily we had 2 of our nurses, Lisa and Jan Dollarhide to smooth things out. Mark stayed in the hospital Tuesday, and came back to camp Wednesday. Lisa is now in the long-haul truckers hall of fame for driving their motorhome, towing the Jeep all the way to Hemet…… in one shot! A big shoutout to Dan Wilson for cutting his trip short and Sheparding her the entire way.

For a return to calmer times, we again did the Shaffer Switchbacks on Tuesday. This is not a Safari run and is not rated, but probably a 1 or 2. 2-wheel drive but very scenic and scary if you don’t like heights. That evening we had a potluck and left a care package at Josh’s doorstep.

Wednesday we decided to try Flat Iron Mesa for the first time in 8-10 years. It is still rated a 6. But the part where you hang on the narrow cliff and squeeze by the rock gets the pucker factor going. John Wood”s guest Nick with his wide rock crawler really pushed the limit. That should be the end of the day’s report but, John, Nick and Dennis decided to do a little extra-credit after the run on Steel Bender. The trail won that round and ate John’s rear driveline, yoke and u-joint, putting him on the trailer and missing Thursdays run to…..

Hell’s Revenge. THE postcard Moab trail. And Josh’s nemesis. He’s back! This time Josh was taking no crap from a crummy trail. He smoked right through it like one of those crazy tour trucks, challenging death itself by doing the dread Hell’s Gate! Well done! You may remember that Jeep Junk cover with the kids being rescued from Darrens\s Jeep, stuck in The Escalator a few years back. Well, Darren is older and wiser now and says NO THANKS to that trap. We did do one of the “tubs”, but it was dry and we all escaped. This was also the night out in town and we chose Zak’s this year. The most fun was the reservation for 23. Laura and I got there a half hour early and attempted to get it smoothed out a little, but it still ended up with 17 showing up and waiting in the bar (not too bad). We got seated at the new rooftop dining area. Then Darren shows up with his group that had now grown to 9, so they ate downstairs.

Our last day I had the the choice of doing Golden Spike (7) or Dome Plateau (4). We had lost most of the “hang by your teeth” members, so we took the scenic route, I actually managed to find the turns without too much trouble. Fun run, especially the end where we had a thunderstorm come at us at the miners cabins. We opted to get in our nice, warm, dry Jeeps and not do into the mine. But…the last 5 miles…the graded county road turned into GUMBO SNOT. The kind that builds your tires up to 48s and throws mud everywhere. We now know why the local car washes take credit cards. Haven’t got the bill yet, but $20 wouldn’t surprise me.

Thanks to all who showed up …some of us never went home after Sedona…Kuesters, Dan Wilson, Davidsons who helped with RR4W runs the previous week. Other members: Ledbetters, Dollarhides, Woods with guest Nick, Dennis Pahuta, Brian and Cheryl Fusilier, Epsteins, Mike Hardy and Lisa, Roedels, Darren with guests Pete, Pete Jr. and several others, and guest Dave Thompson…The Jeep Doctor.

Start planning for 2020 now, Easter is April 12, 2020. Brrrrr. That will be our first day and most reserve 6 nights and leave Saturday.  Make a reservation at Portal, they fill up fast. OR, some have discovered the Air B&B route. Talk to Jon Wood. Start saving up some gas money……..