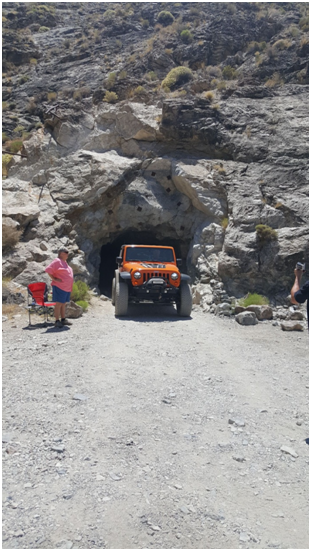 The weekend of July 26th through the 28th a small group from the club ventured up to the Lone Pine area.  Donna De Vore had destinations on her bucket list which she finally had the opportunity to cross off.  With the help of Mark De Vore, Bob and Lei Lani Kuester, Dan Wilson, and Angel Calleja we set out on the adventure.  Friday morning July 27th the journey began with a visit to Manzanar Relocation Camp.  This was a place in which Japanese Americans or Japanese immigrants were interned and guarded during World War II.  There were over 10,000 individuals placed in the camp and were judged not on their character… but simply because of their ethnicity.  We viewed a short video, looked over artifacts in the museum, and took a self guided auto tour of the camp, gardens, and ponds.  There are 2 barracks which have been reassembled for viewing.  In addition, there is a cemetery monument which is a focal point of the annual pilgrimage, serving as a symbol of solace and hope.  So everyone will remember!  We spent about 2 hours at the Manzanar camp.  On a side note, the Kuester’s dentist was a 16 year old young man at the camp and his name along with his family’s name can be seen in the museum.

We left Manzanar and began the trip to the Reward Mine.  It turns out the Reward Mine road is directly across the street from Manzanar.  It took a few tries to locate the mine but in no time we were at the entrance.  Mark and Donna led the way into the mine with the jeep, Dan and Angel, and then Bob was tail end.  Lei Lani stayed at the mine opening.  There are few words to describe the drive in the mine.  Mark kept ducking his head with a similar feeling of a low ceiling in a parking structure.  We continued to travel into the mine for 20 minutes and came to a good turn around spot.  We got out, walked around, took a group picture and Angel found a vertical mine shaft.  The shaft went up out of sight of the flashlight rays.  No way of knowing how far it went up.  The temp in the mine was very cool especially compared to the near 100 degrees outside.  We returned out the way we had come in, had a nice lunch in the mouth of the mine.  Dan Wilson said this mine was the highlight of the day.

After the mine, we drove to the Lone Pine motion picture and Film Museum.  The museum highlights the over 400 movies/tv series which were filmed in the “Alabama Hills” just outside of Lone Pine.  We viewed displays of vintage cars, movie posters, and other memorabilia.  We gathered up a map of the Alabama Hills and took off with Bob in the lead.  On these trails we were able to see areas in which films such as Gunga Din, The Lone Ranger, Tycoon, How the West Was Won, and the 1990 movie Tremors was filmed.  We also got to see Sasquatch, a naked man with a walking stick in the middle of no where.  It made us wonder if he was lost or part of a movie shoot ??  We also got to see a few arches in the area.  The drive continued to Tuttle Creek Camp ground for a look see.  This dry camp ground sits along the creek and we did a stop to check out the flowing water and wishing for a fishing pole.  The water was very cold but inviting due to the hot temperature.  The day ended with dinner in Lone Pine at the Season’s Restaurant, and night cap back at the Boulder Creek RV resort.

Saturday morning we headed out with Angel in the lead to Cerro Gordo Ghost Town and Mine.  After a short 30 min but very steep drive we came to the town/mine.  We were greeted by the current care taker and he was a very informed individual with many, many, many  stories of the town and mine.  This mine was very active with over 2500 to 5000 residents working the mine and various jobs in the town.  There are some buildings which have been maintained over the years and some which are in very poor condition.  All around you can see the ore cars, working tools, the samples of the rocks which were collected to be processed.  The Hotel was the best building to view as a look back in time.  The card room held time period playing cards, antique table and chairs.  There is shotgun holes in the corner of the room and blood stain on the floor.  What a bad day for a card player that had to be.  We spent over 4 hours looking and listening to stories of the town.  If you are  ever in the area you need to stop by and check it out.  There is a $10.00 per person charge to visit the town.

We left Cerro Gordo and headed for over an hour to the Saline Valley Salt Tram.  This is a construction marvel from the turn of the century.  It transported salt from Death Valley over the mountains to the Owens Valley where it was processed and then transported by rail to market. The tram line is 13 1/2 miles and began construction in 1911 and the first salt was delivered in 1913.   Salt was carried over the mountains until 1930.  The towers can been seen from the trail as you head down the mountain and it’s unbelievable how this could

have  been constructed in this harsh environment??  The trail down the mountain was amazing.  We were about 9700 ft at the highest point on the trail and the temperatures were in the upper 70’s.  Although were kept our eyes out for animal life we only saw birds, squirrels, and lizards.  I was so hoping for sight of deer, elk, big horn sheep, or even a bear but didn’t happen.  Next time!!

As we found ourselves at the bottom of the mountain, we came across a marker for the Owens Lake Silver-Lead Furnace.  It was built in 1869 and used until 1874. During those years the output of the furnace was around 150 bars of silver every 24 hours each weighing 83 pounds. We also found some old equipment such as a generator on a trailer and an old flat head engine which was used to drive a belt/pully.  Back at the RV park we sat in the evening shade and talked about the days events.  Dan noticed he had an electrical issue with his motorhome and had to run his generator all night to be cool.  He did have to end his trip early by a day.  Mark and Donna had to leave Sunday also and sadly had to leave Bob and Lei Lani behind.  They would have to continue on more adventures alone.