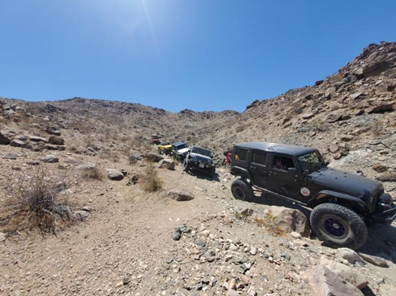 Well, Hi-Desert Round up 2021 is officially in the books and spite all the ‘other shoes’ I awaited to drop and either ruin or make life unfair, didn’t happen and we actually had a great event!
It takes a lot to put on an event like HDR and most don’t realize what goes on in the background to put on an event other than where do I buy my raffle tickets and when is the raffle. This year was the HDR from the death of 2020 and should have been the 50th running of Hi Desert Round UP. The entire committee and I were apprehensive at best if we could pull off a event of this size in the little amount of time we had to do so. There were a lot of obstacles to overcome and not a whole lot of time to do it, man, that reminds me of a song and a movie..
The first big obstacle was where the hell are we going to have it? The Slash X Café is our go to spot but the owner Gail at first was concerned if she could have hit there with all the restrictions and luckily we agreed to host the raffle, registration and kids games at the compound and later got permission to have a few of us committee members camp there to keep an eye on the place and our stuff. This was nice to camp there but sucked since all of us have our own clubs and would like to camp with our clubs who sadly, weren’t allowed to camp inside Slash X but on the other side of the bob-wire, about 200 yards from where I camped, it was legal to have open camping per the State of California – I’m still trying to wrap my head around that.
Issue number 2, the BLM and the state regarding permits and C19 regulations and guidelines – Luckily Jeff Blewitt, our former NRC had started the process and helped me on the side when needed. With Jeffs help and Shirley Bramham, Bonnie Steel in the office and some advice/guidance by the other to VP’s, the permit process was taken care of and now we had to figure out the other 100 or so things which all fell together rather well with the help of my Committee; Christian Hummer, Keith and Sandy Graham, Karen and Jim Lykins, My Co-Chair Russ Chung and my better half Christina Epstein who got in the middle of it all and filled whatever crack that appeared and kept the whole operation going smoothly

At first, we weren’t sure if we could have a raffle due to restrictions but after we got the okay, I leaned on the general membership to help where they could and then used my contacts within the South District to extort whatever items I could get where I got a pleasant surprise from Turners Outdoorsman who donated 1000 rounds of 9mm ammunition and Mercedes Benz of Ontario went above and beyond by donating kids items, a TV and a really nice golf bag.
I had every intention of leading the run Saturday but had reached out to Robert Kuester and he gladly said he would lead and or help where ever he could. Luckily, I was able to temporarily abandon my responsibilities and led the ‘achy breaky’ run which went very well with about 25 in tow. The weather was awesome, had a great spot for lunch where Jason C talked his lovely bride into letting him land a drone on her hand, well, which didn’t turn out to hot. We were doing great, well great till we got atop of the towers and the backside of the trail was pretty bad. Jason Cooke, along with Mr. Kuester helped move a rock the size of a VW Bug that I had unknowingly relocated to the middle of the trail and once that was moved, we were able to finish the run with only one problem the whole day, a broken tie rod end that luckily Jeff Schenk and Mark DeVore were able to get them back together and home in time for the best equipped Jeep contest held that night that in my opinion, Jason/Kaylie Cooke and Yvette/Kyle Jones won it but the other team cheated and ultimately, the Hemet Jeep Club was Cheated once again.
Sunday morning we found ourselves getting ready for the adult games which luckily, the Hemet Jeep Club came out strong and was able to secure a spot and did our historic Tortoise Crawl game as other clubs graciously hosted games as well, like GenRite did the wet lap race and the High Desert 4-Wheelers hosted the RTI ramp which I only had time to play on twice, once in the morning to check out that fancy suspension and in the after noon around 1:50pm, I asked if I was still in first place and he said no, so Jason Cooked and I played in the gray lines and did it again damn near maxing out the ramp and not only winning the long wheel base category but I won over all! I have no idea why I’m so excited about a ramp, but you have to take the wins when you can.
The kids games went pretty well from what I heard since I had to book it to town to locate a printer and paper for awards that somehow we forgot at some point so when I got back, Russ Chung sat in my motor home with the AC and kids making noise typing up the awesome awards for the adult games – I’m sorry Russ.
The weather cooperated very well Sunday with the games and awards and even into the raffle, the wind picked up slightly but not a ton to where I MC’d the raffle for a hour or so handing out prizes to a lot of people since the raffle was so big considering what we started out with.
Overall, this years HDR was awesome and turned out even better than I hoped. I’m sure I screwed things up and I’m sure as a whole, the HDR committee screwed things up but at least we looked like we knew what we were doing.

I want to give a special thanks to all of you that braved the elements to come and help me in whatever
way you could and even those of you who came by numerous times to offer help only to hear me say “we’re good for now, but come back in 5 minutes”. They say ‘it takes a village’ and I couldn’t be prouder of my village.

For those of you who missed it this year, you really missed a great time! I could write for hours of all the cool, funny things that happened over the weekend but I don’t’ want to bore you – I hope to see you all there next year for the official 50th Running of Hi Desert Round up! 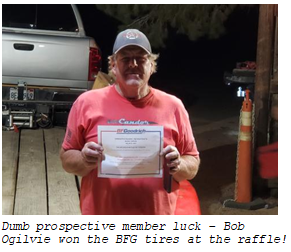 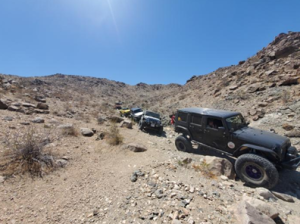