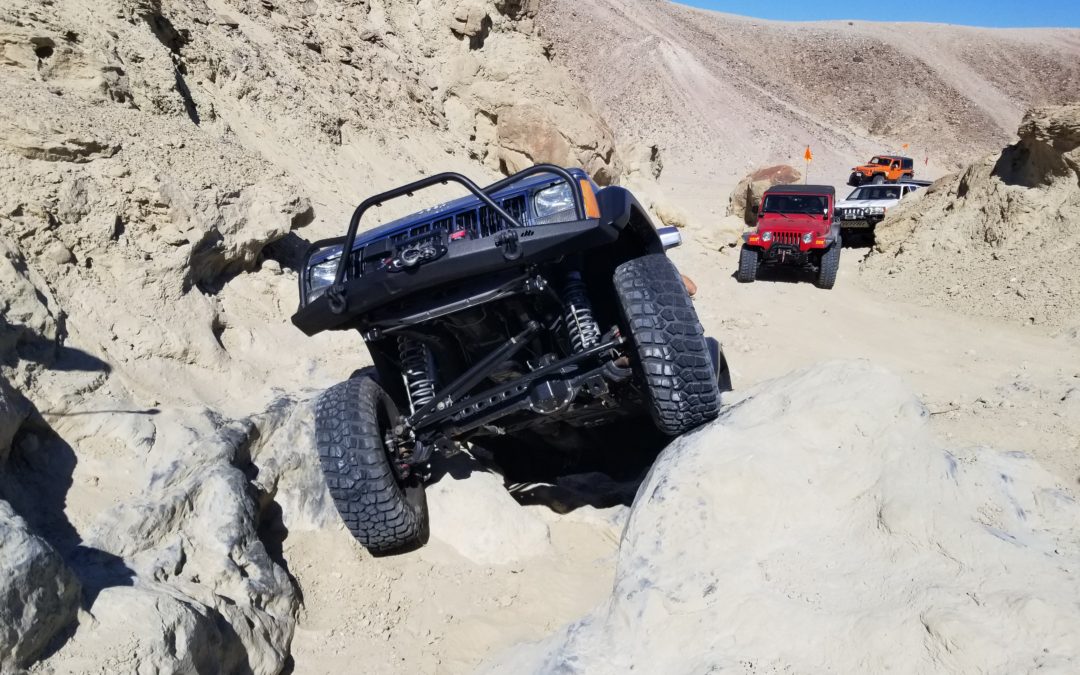 The pre-run was more for seeing how my new JK worked out before I led the actual run and my lovely wife took the old, reliable White ZJ of death on both the pre run and on the run – and literally beat it like she doesn’t have a dime in it – and we both made it out, both times un-scathed.

The pre run sorta sucked since it rained the week before and there was quite a bit of mud everywhere which at the time may be fun but pretty much sucks having to clean it off after all the fun is done with  We got sorta lucky tho –  after searching for a car wash since mud in my bead lock wheels throws the balance off so bad I couldn’t’ go faster than 25mph, we found a truck wash off Dillon road that I thought we could at least see if I could use a hose to clean my wheels off.  For $15 a Jeep, they completely cleaned all the mud and crap off of them damn near completely – so the drive home was a little faster than 25mph and we had nice clean Jeeps and even better – I didn’t have to clean mud off the whole next day!  Even with all this, a day of Jeeping is better than a day at work and I was pretty sure we had a great trail for everyone to run with all types of different things to try and please everyone.

This year, the 20th annual Earle Powers run, since its inception that Mike Hardy was not at the helm and my first year taking over the run – so being bitter sweet leading the run this year but not having its co-founder there sucked but I got to hang out and run the pre-run with Mr. Hardy a week before in his fancy new LJ

I had every intention of getting out to North Marina Drive Thursday or even earlier but didn’t end up getting out there till Friday.  Saturday morning I wasn’t sure what to expect as far as attendance, I could see all the RV’s out there but sometimes we get the ones who want to come out for the day and we had one person, a prospective member come out.  I didn’t get an exact count but I think we had 20-22 jeeps out there Saturday and we ended up leaving around 9am.

I planned this run to be a lot of twista-flex and exploring of areas that a lot of people have not seen.  Moreover, its hard to please everyone where I like the more harder, more complex stuff personally, sometimes the slower, scenic stuff we did Saturday was a lot of fun but like Mark DeVore told me later – “You can’t please everyone”.  From what I can tell, everyone had a great time.  There is one spot where last year Jeremy broke an axle and Mr. Vanderwaal wanted to prove that his Cherokee is used and made it up what was later dubbed “Cherokee Canyon” – very impressive.  So impressive that my wife figured she didn’t have a dime in the Grand Cherokee, so why not?  She also made it up – took a little more but made it none the less. We ended up heading back to camp at about 3:30pm just in time for everyone to start cooking which ended up being another spectacular Mexican pot luck which was followed by trick or treating for the kids and an exceptional campfire.  There might have been a few who may have been over served as well but hey, that’s camping!

I want to thank everyone who made it out and supported myself and the club.  I hope everyone had a great time! – Josh Epstein