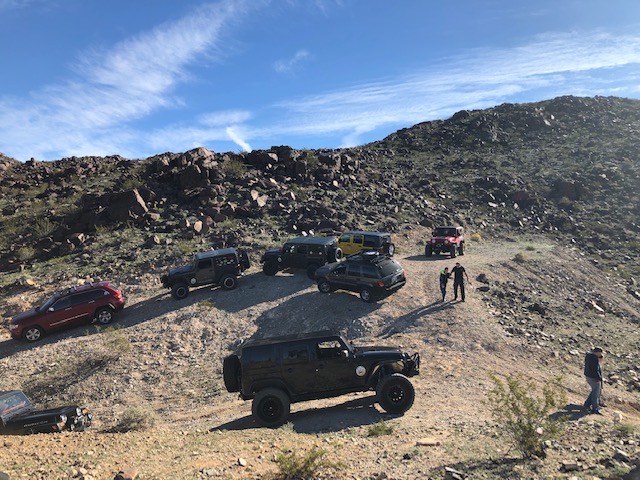 Every Super Bowl Sunday I have been going out to the desert. It give us the desert to explore without the crowds. This year we left  Mt San Jacinto College a little after 7am after a few of us had breakfast at Patsy’s.

We were off to 29 Palms and a quick stop for fuel and facilities, then to Gold Crown Road. Where the smart ones aired down and disconnect sway bars. Now I was expecting a cold wind and mud, never happened. The previous nights rain soaked into the ground quickly, except for those rocky roads. It moved loose rocks around to expose lots of in-bedded rock. Instead of a easy road it was very rough. Roy Wallace took Anita’s Grand Cherokee and had as much fun as I use to. Working hard no to hurt her rig. Only a few scrapes on the front spoiler. Jim Blue shook down his  New Toyota Tacoma. Said he had a few scrapes but made it with style and comfort. He says he bought it to haul his UTV but Mary Ann looks good in red. We had a total of twelve vehicles. We first stopped at the Virgina Dale mine.

The rain washed tons of rock away and exposed more remains this year. Then off to Lorman Mine with its awesome views. A great place for lunch. Then we headed to Supply Mine. Like most mines in this area, not much is left and what is has been trashed. A small group went around the corner and stop at another mine that I do not know the name of. After we all grouped back up we went to the Golden Egg Mine. There is an open shaft t but no one wanted to venture down a rocky hill. The road down the the mine was extremely rough. Tammy’s Jeep made it with no problems. We then headed out to the paved road and Back to Hemet.

Thanks to all that joined me. Great trail, great weather and great company.